There are many chemical fertilizers, as well as pesticides and fungicides and herbicides, allowed within conventional farming, which is where most of the food that’s in our supermarkets and farmers markets is produced.

While organic farming is a step in the right direction, there are a lot of organic farms we’ve visited that do not have compost piles and are not incorporating their own organic waste into the picture. If you are just buying pelletized bonemeal, blood meal, and feather meal from a Tyson chicken factory as fertilizer, and you’re still calling it organic farming with no life in the soil to process and make these nutrients available to plants, it will still wind up with the same signature as negative aspects of conventional farming.

So today we’re talking about PEST CONTROL within a garden because, let’s be honest, spending time and energy building your compost pile, planting weeding, watering… only to lose half your crops to pests can be frustrating to say the least.​

There are still many pesticides “allowed” within organic farming. They are labeled as Pyrethrum​ and bio pest control – but if you dig deep it is just another way of being lazy and trying to maximize on the dollar by a mass extinction approach rather than finding balance and allies around you!

So let’s take the next step. Let’s think regenerative. Let’s re-generate the land around us. Let’s grow soil and take nutritious food as a byproduct! Let’s try and practice stewardship by engaging with nature and building strategies with your allies to find balance!​

One of the fundamental philosophies that we build into all of our living earth systems and teach our students is to work WITH nature. We do this in a lot of ways – one of them being to promote biodiversity and to build your team of garden allies.

Eddy captured a great clip of one of our garden allies in action just the other day ?

Having this team of creatures in place means less work for us since it is to their advantage to kill the critters we see as “pests” (yum).

You have to realize that when you commit to not using any chemical pesticides (including “organic” pesticides) that some of what you grow will be eaten by creatures that are not you.

The biggest trick to preventing most of this though is to having a relationship with your garden that includes DAILY INTERACTION and mindfulness.

It means really slowing down and looking at the leaves and the fruits to see if there are tiny caterpillars or aphids or eggs on them so you can catch a pest before it actually becomes a problem.

For many, this is a difficult habit to form considering the hustle and bustle of modern living. But what it offers is EMPOWERMENT. Building this relationship with your garden empowers you to know that you don’t have to rely on chemicals, or what the store sells, or fluctuating prices.

It means that you can take care of yourself & it’s a huge step towards freedom.

Pest Control is a very large topic in our eyes, and we’ve only scratched the surface in this email. Look out for more on this soon! But in the mean time, we’d love to hear about how you deal with pests (or cultivate symbiotic relationships) in your garden. 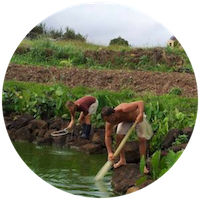